Please note that this is a look at the early days before Oasis was even named. Oasis has evolved beyond many of these early ideas, some of which may be seen as conflicting with our core values. The ideas presented here need to be looked at in the context in which they were formulated.

When I look back at where we started, I'm amazed at how far we have come. When we first started thinking about an organization, we were looking for a replacement for our church community which closed down after our pastor (Mike Aus) came out as a freethinker on national television. It took a number of conversations for things to come into focus and to get an idea of what we were looking for. One basic idea that was key to us was: If your beliefs require you to hurt people, change your beliefs. This was core to our brainstorming and it rapidly evolved into the first core value: People are more important than beliefs. The other core values, in my mind, all derive from this first basic principle.

We weren't sure what aspects of church we were trying to swap out and which we were trying to preserve. We clearly wanted an organization based on scientific thinking and rational thought, but we weren't sure if we wanted to include other aspects of church, such as ritual. We knew right away that community was an important aspect but it wasn't until we started bringing other people into the conversation that we realized it was the aspect that most needed to be preserved.

In particular, our thinking was based on original Christian traditions and we were assuming that we would be a post-Christian style of organization – a successor to Christian churches. It wasn't until later as we were introduced to more of the freethinking community that we realized that our organization would be of interest to anyone in a post-religious context (ex-Muslims and Jews for example), or even to people who were still religious in some way.

After some time, I took the results of our brain storming and created a list of the ideas about the organization we were creating:

As you can see, while many of the items are covered by our current core values, some are not. The post-Christian thinking is evident. Once we stripped that out, the core values more or less fell together out of the list. Actually we had about ten, but decided that was too many and stripped it down to the essentials, until (with a little time and a little polishing) we ended up with what are Oasis's core values today: 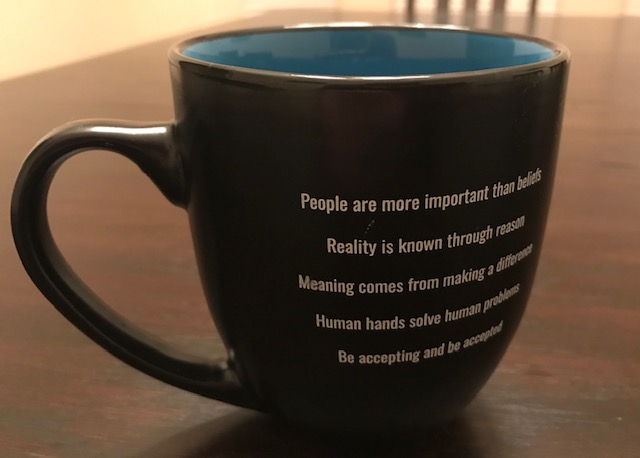